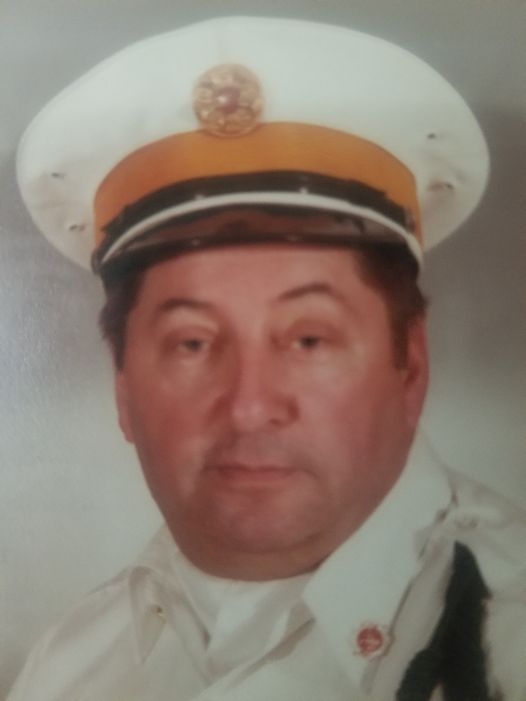 Biography: E. ALLEN JACKSON SYLVAN BEACH – E. Allen Jackson, 89, died Friday, April 30, 2021 in Parrish Medical Center, Titusville, Florida, where he had been a patient for the two months, Born in Shinglehouse, Pennsylvania, on October 11, 1931, he was the son of Ross and Hattie Van Slyke Jackson. A resident of Sylvan Beach for the past sixty years, Al was a graduate of Stockbridge Valley Schools and served with the United States Army during the Korean War era. He married Nanetta Hyland in Stockbridge United Methodist Church on June 27, 1959.Prior to his retirement in 1997, with twenty-three years of service, Al was the superintendent of the Village of Sylvan Beach Department of Public Works and also managed Skateland in the village. He was a life member, with over fifty years of service, with the Sylvan Beach Fire Department, where he served as chief for nineteen years, a fire commissioner and chairman of the fire commissioners, a village trustee for four years, a member of the Oneida County Fire Chiefs Association, a member of the International Order of Odd Fellows, where he also served as District Grand Master, a member of the American Legion, Sylvan Beach Post # 1153, a member and president of the Sylvan Beach Youthful Seniors and was a member of the Vienna United Methodist Church. Surviving besides his wife, Nanetta, are his two daughters and their husbands, Wanda and Timothy Durant of Sylvan Beach and Gail and Thomas Garrison of Oneida; his two sons, Duane A. Jackson of Verona Beach and Robert R. and his wife, Christine Jackson of Vienna; his eight grandchildren, Roger (Kathryn) Jackson, Lydia Durant, Erin, Anna and Claire Garrison, Raymond [Alberta) Jackson, Millenia Jackson and Robert Jackson; and five great-grandchildren, Ava, Vale, Jenny, Ethan, Elijah and Greyson. Funeral services will be held 1:30 PM, Saturday (5/22) from the Campbell-Dean Funeral Home, Inc., 260 Main Street, Oneida, with the Reverend Marsha Madore, officiating. Interment will be made in Stockbridge Cemetery. Friends may call at the funeral home, 11 AM-1:30 PM, Saturday, prior to the service. Contributions, in his memory, may be made to the Sylvan Beach Fire Department, 908 Main Street, Sylvan Beach, NY 13157. To leave a message of condolence, kindly visit www.campbell-dean.com. CAMPBELL-DEAN FUNERAL HOME, INC. Oneida

Condolences(09)
Kerry Thieme
#1
Al or AJ was always at our farm and home when I was younger. I remember him giving me a satin Japanese jacket upon him coming home from the army. He really enjoyed dancing and was very good on roller skates. His dedication to the fire department and village of Sylvan Beach was so important to him. May your memories of him give you comfort. Kerry Thieme
Guy and Karen Berogan
lit a candle
#2

We are so sorry for your loss, All was always so vibrant and willing to help anyone in need. He will be sorely missed.
Gail Fanning
#3
I was sorry to hear of Al's passing....truly a remarkable man...He gave his All through the Fire Department and he did...Always A big smile and hello where ever I'd see him....May God comfort you all during this time
Michael (Dave) Hartwell
lit a candle
#4

Dear Nanette and Family, I wanted to express my Heartfelt Sympathy to you and your family to the loss of your Loving Partner, Al. I only knew Al for a short time through the Youthful Seniors, but I too will miss him.
Don Marino
lit a candle
#5

Netta and family, I am so sorry to learn of Al's passing. Many fond memories of your family during my time in Sylvan Beach. I definitely would love to attend the service but unfortunately will be in Long Lake Saturday to teach a class. My thoughts and prayers will definitely be with you. Hope to see you sometime this summer.
Edward C McCarthy
lit a candle
#6

Nita and family, I want to thank you so much for sharing Al with our community. He has always been so helpful to everyone he came in contact with. He absolutely should be known as "Mr. Sylvan Beach". We have lost a great man, husband, father, and friend.

Donald Raymond Goppert
#7
To "Nanetta" "Anita" "Nan" "Neeta", Wanda, Duane, Robert, Gail Lee and Family.
I am so very Sorry for the Great, Tragic Loss of E.A.J..
A Vacume in Sylvan Beach was formed when He travelled to Heaven.
He is with Saint Michael the Arc Angel, Saint Gabriel the Arc Angel and Saint Raphael the Arc Angel; along with His Loved Ones that have travelled over There.
Snowflake (HIs Dog) is on His lap when He is not dancing; and having Feasts with Kings and Queens.
There are no more tragedies for: "Al" to come to the Rescue of.
He has done All of His Hard Work and Is With Christ Jesus The Lord.
He is with All of Those that He helped to save from Fires and Medical Emergencies.
He Loved His Family with All His Heart and Soul; and wanted Nothing More than to be with Them.
While Allen was Fighting Fires, Saving Lives Stopping Floods, Their Love and "Dinner at Home" gave Him the Anchor to Hold On until He could be with Them Again.
He will always be with Them because: "God Is Love. Anyone Who Abides In Love, Abides In God".
Al may have not gone to "Church" every Sunday, but He Dilligently served, worked and Helped as often as He could.
I may not have graduated High School, Herkimer College, S.U., ESF, SFS without Him.
When I was in Africa, I thought of He and Anita preparing buffets, listening to radio and being Happy.
I fell in Love with a Kikuyu Princess and wondered if I would ever see Him again - when I prepared to stay in Kenya there longer.
I knew that Sylvan Beach was "all right" when I returned and saw Al smiling and say "Hi Donnie".
He did not Judge my love for education and knew that I was no stranger to very hard work.
Sylvan Beach has lost a Guardian of Goodness.
The Bible says "what profiteth it a Man to gain the world yet lose His Soul".
As Long as Sylvan Beach stands, It Means that Al Jackson's Hard Work has been Succcessful.
Most of the time, He did not Judge.
He Showed Compassion.
A strong man knows when to be submissive.
This Summer and the following will be intense in Sylvan Beach; and People will say or think: "I wish that We could have "Al's Input".
He was a part My Extended Family.
He believed in Racial Equality.
For that I will never Forget Him.

Danielle Fralick
#8
Uncle AL was full of sunshine to be around and very much loved I am going to miss his jokes playing cards Talked about how much he won at the casino I will be praying and thoughts for the family
Sharon and Wayne Mattice
#9
Al lived with my family (Fred & Grace Atkinson) for many years when I was growing up. I always thought of (Elmer) as a brother. I enjoyed so many moments with Al over the years and also with Neta. I am sure going to miss talking to him but I have many wonderful memories.
Top