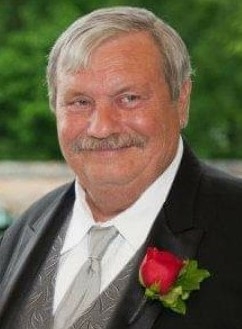 Biography: EDWARD A. HALL
DURHAMVILLE- Edward A. Hall, 70, State Route 46, died Tuesday, April 26, 2022, in Oneida Healthcare, surrounded by his loving and caring family.
Born in Boonville, on December 26, 1951, he was the son of Albert and Ruby O’Brien Hall. A resident of Durhamville for the past forty-three years, Ed was a graduate of Adirondack Central School and served with the United States Army during the Viet Nam War era. He married Angela Fazekas in St. Paul’s Church, Rome, on July 2, 1976.
Prior to his retirement, Ed owned and operated Hall Enterprises, a contracting company and previously had been employed with Revere Copper and Brass Co, Inc. He was a great family provider and loved animals, the outdoors (even yard work), his chosen work and the customers and motorcycles in his younger years. Ed was of the Methodist faith.
Surviving besides his wife, Angela, are his two daughters, Theresa (Nicholas) Toepp and Amy (fiancé, Andrew Jordan) Hall, all of Rome; his brother, David Hall of Ava and his daughter, Brandi Hall-McCanney; his three grandchildren, Ethan, Lucas and Autumn Toepp; and several nieces and nephews. A grandson, Elliott Toepp died on August 14, 2014.
Funeral services will be held Sunday, at the convenience of the family, from the Campbell-Dean Funeral Home, Inc, 260 Main Street, Oneida, with the Reverend Bryant Clark, officiating. There are no hours of visitation. Contributions, in his memory, may be made to the humane society of one’s choice.
To leave a message of condolence, kindly visit www.campbell-dean.com.

CAMPBELL-DEAN FUNERAL HOME, INC.
Oneida
Condolences(04)
Christine (Hall) Blanck
#1
So sorry too hear of Edward's passing. I'll remember him fondly. Loved spending time with him and Angie. Both were participants of my wedding. God blees
Darlene
#2
Angie and family,
My deepest sympathy
Cindy and Carl Vaillancourt
#3
Theresa and family, we are so very sorry for your loss. Know that we are thinking about you and love you.
Thomas C Swerdan
#4
Angela and family, I am so very sad to read this. Ed and I had a great time working with my Dad at Delta Heating back in the day, My dad, and my entire family were very fond of Ed, and I know Ed thought the world of my dad as well. I always looked for him outside when I drove by your house, but wasn't lucky enough to catch him, and now I regret not stopping to check in on him. Please accept my condolences, and let me know if you need anything.
Top