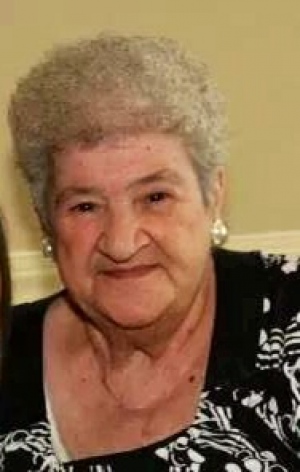 Biography:  LUCY R. TAYLOR
CANASTOTA- Lucy R. Taylor, 81, Belleview Drive, died Wednesday evening, July 2, 2014, in the Oneida Healthcare Center, where she had been a medical patient for the past two days.
Born in Rome, on March 2, 1933, she was the daughter of Michael and Margaret Tucci Rossi. A lifelong resident of the area, Lucy was educated in Canastota schools. She married Clarence J. “Frenchie” Taylor in Canastota, on August 25, 1951. Mr. Taylor died on July 22, 1974.
Prior to her retirement, Lucy was employed with the Canastota School District and previously with Vernon Downs. She was a communicant of St. Agatha’s Church, a former member of the Canastota Fire Department Auxiliary and bowled in several Canastota leagues.
Surviving are three daughters and sons-in-law, Michelle “Poochie” and James Herringshaw of Canastota, Mary and Robert Marshall of Verona and Tracy and Keith Miller of Oneida; one son and daughter-in-law, Mark A. and Barbara Taylor of Canastota; one sister, Mary Del Vecchio of Rome; three brothers and two sisters-in-law, Patrick and Mary Rossi of Riner, VA, Anthony and Rena Rossi of Oneida and Michael Rossi of Oneida; thirteen grandchildren, twenty-five great-grandchildren and several nieces and nephews. She was predeceased by three sisters, Delores Shlotzhauer, Mary Calutti and Theresa Hastings and one brother, Frank Rossi.
The family offers a special thanks to Dr. Jim Vanderhoof and her dear friend, Rose Stagnitti for the years of care and concern, and to Carol and Christie who were special caregivers to Lucy.
Funeral services will be held 10 AM, Tuesday from St. Agatha’s Church, where the Funeral Mass will be celebrated by the Reverend Stephen Wirkes, pastor. Interment will be made in St. Agatha’s Cemetery. Friends may call at the Campbell-Dean Funeral Home, Inc., 300 South Peterboro Street, Canastota, 4-7 PM, Monday. Contributions, in her memory, may be made to the Central Association for the Blind and Visually Impaired, 507 Kent Street, Utica, NY 13501or the American Cancer Society, Box 7, 6725 Lyons Street, East Syracuse, NY 13057.  To leave a message of condolence, please visit www.campbell-dean.com.
CAMPBELL-DEAN FUNERAL HOME, INC.
Canastota

Condolences(09)
sally lloyd
#1
To a wonderful sister-in-law,lucy we had some good times formany years,may u rest in peace. You will be greatly missed. You are know reunited with clarence,frenchie and the rest of your family. Love u lady sally

Charlene Reed
#2
Aunt Lucy, things will never be the same without you here. But I know you're in a better place, and somehow I think you will still be there making us laugh! I love you much!! Deana
Reenie Dailey
#3
May you rest in Peace Lucy... I never had the priviledge of meeting you, but through the friendship of your daughter's Mary and Poochie, I know of the love and admiration they have for you. It is evident through them and the legacy you leave ~ your other children, wonderful grandchildren, and great greatchildren, that you were truly an amazing woman here on earth. They all will continue to benefit from you as you watch over each of them from your special place in heaven. My thoughts and prayers are with your family as they grieve losing you. May they all cherish their mamories, and hold you close to them always.

The Tufte Family
#6
On behalf of the Tufte family sorry for your loss lossing a parent is never easy God Blessyou and the familyyou are in our prayers love Rythi,Rusty,Guy, Lynnand Kevin
Cherie Clarke
#7
Aunt Lucy, I know now that you are all back together you are having one heck of a party. I see your name I smile, I see your picture I smile. I love you I will miss you and someday we will all
be together again
Jen Renner Hilts
#8
Mary, Bob, Cas, Missy, CJ, Kenzie, & family--I'm very sorry for your loss. You are all in my thoughts and prayers. My you find peace during this difficult time through the memories you have of Lucy. With love--Jen.
The Trujillo Family
#9
To the Taylor family & Hi-Way Bowl Family members...Our sincere condolences go out to each one of you on the loss of a beautiful lady that touched your souls deeply. We wish you peace and to hold tightly to the memories you all shared with her. Much Love, Andy & Roni Jo
Top