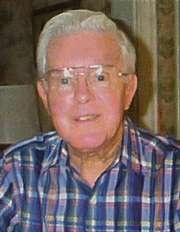 Biography: GLENFORD P. FISH
ONEIDA - Glenford P. Fish, 90, formerly of Brooks Street, died
Tuesday morning, March 12, 2013 in the Extended Care Facility, where he had been a resident for the past three months.
Born in Malden-On-Hudson, December 22, 1922, he was the son of Glenn and Alice Paradise Fish. A resident of the area since 1952, he was a graduate of Saugerties High School and Syracuse University, where he earned both his bachelors and masters degrees. He married Marilyn Knapp in Greensboro, North Carolina in 1943.
Prior to his retirement, Glen was a chemistry teacher for over twenty-seven years at Oneida High School and was also the assistant principal for the school. He had previously been a teacher for the Lindonville schools. During the summers of his teaching years, Mr. Fish was employed with the former Oneida Valley National Bank and became a full-time employee following his retirement. He was a member of the First United Methodist Church, the Masonic Tri-Valley Lodge #148, the Ziyara Shrine where he served as past potentate , the Oneidas Club, past member of the Knights Templar and served on the Board of Directors for the Oneida Salvation Army and Oneida Library. He served with the United States Army Air Corp. during World War II in the European Theatre.
Surviving besides his wife, Marilyn, are two daughters and one son-in-law, Louise M. Fish of Oneonta and Dr. Yvonne Fish-Kalland and Paul Kalland of Cortland; two sons and daughters-in-law, Col. (Rtd) Paul G. and Gosia Fish of Indialantic, Florida and Richard G. Fish and Sandra Anderson of Ridgeway, Ontario; six grandchildren, five great grandchildren and several nieces and nephews. He was pre-deceased by a sister Jane O. Fish Stoly.
Funeral services of military honors will be held 11 AM, Friday from the First United Methodist Church, with the Reverend Colleen Preuninger, officiating. Interment will be made in Glenwood Cemetery. Friends may call at the Campbell-Dean Funeral Home Inc., 260 Main Street, Oneida from 4-7 PM Thursday. Contributions, in his memory, may be made to the First United Methodist Church, Grove at Main Streets, Oneida, NY 13421. To leave a message of condolence, please visit www.campbell-dean.com.