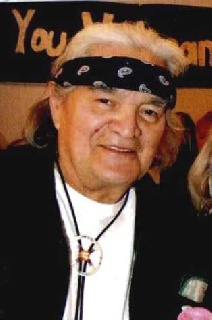 DOUGLAS “SKY” JONES
MUNNSVILLE – Douglas “Sky” Jones, 75, Middle Road, died Monday, June 17, 2013, in the Oneida Healthcare Center, shortly after his admission.
Born on the Onondaga Indian Reservation, Syracuse, he was the son of Eugene and Ella Mae Thomas Jones. A resident of Munnsville since 1971, he was a graduate of Lafayette High School. He married Gladys “Mickey” Palmer on April 13, 1971.
Prior to his disability, he was a tractor trailer driver for Paul Jeffrey Warehouse and with his wife , he owned and operated Distant Drums, where they made American Indian arts and crafts. Doug was a member of the Munnsville Fire Department for twenty years, where he served with the fire police and was a member of the Munnsville American Legion Post 54. He was a veteran of the United States Marine Corp serving in Okinawa, Japan from 1956-1959 with the military police.
Surviving besides his wife, Gladys; are one daughter and son-in-law, Valerie and Kevin Loveless of Peterboro; three sons and daughters-in-law, John and Amy Bogdal of Memphis, Tennesee, Kurtis and Joann Bogdal of Villa Rica, Georgia and Michael and Patricia Bogdal of Chattanooga, Tennesee; additional children, Joseph, David and Maria Jones; two sisters, Alice Dunning and Ellie Virginia; one brother, Owen Jones; seven grandchildren, John, Sarah, Kira, Kasha, Ashley, Gregory and Gina; and three great grandchildren, Zack, Savannah and Jaiden. He was predeceased by several brothers and sisters.
Funeral services will be held 1PM, Friday at the Campbell-Dean Funeral Home, Inc., 260 Main Street, Oneida with Jay Meachum, officiating.  Interment will be made in Stockbridge Cemetery. There are no calling hours. Contributions, in his memory, may be made to St. Jude’s Children’s Research Hospital, 501 St. Jude Place, Memphis, TN 38015. To leave a message of condolence please visit www.campbell-dean.com.
CAMPBELL-DEAN FUNERAL HOME INC.
ONEIDA
Condolences(08)
Cathy and Mark Los
#1
Mark and I will treasure all the memories we made with you both, all the festivals, all the laughter, all the times sitting here in Jefferson with you, just having wonderful visits. Because of Doug's talent, we have a reminder of him wherever we turn in our home. You and Doug will always be part of our lives, Mickey. We will always love and cherish you.

Love you,
Cathy and Mark
Kim Griffith, Jenna (aka Magoo), Harry, William & Family
#2
Our friendship has grown over the years, from 1st knowing Mickey in school, my brother helping build the log cabin, many trips to Hunter Mountain with my parents, but I think the one that stands out the most for what you did for me 27 years ago I was comfortable in your new recliner and you guys wanted to let me sleep there after the cards games but I said no gonna go home to bed well a little later you got the phone call I was in labor and needed to get to Griffiss Air Force Base to have my daughter aka Magoo and you drove us there in the middle of a snow storm and used the CB radio to get someone to land line them that we were in route and they were waiting at the door for us. Thank you for all you did! You have been and always will be a part of our lives!
Niles Brown
#3
Doug and I were were classmates at La Fayette class of 1956.
We renewed our friendship when I moved back into the area in 1999. He was mild mannered but strong in his beliefss. His letters to the Editors creied out for action. Thank you to his family for sharing this special man with us. I also had the priveledge of meeting his brother Larry a couple of months before he passed away. I was a better person for having known them.
Sky
#4
A gathering and food will be held at the munnsville legion immediately following the cemetary service.
Carl and Freida Griffith
#5
He truly taught us the meaning of a true friendship and it's one we'll never forget.
RIP my special friend!!
Pat Sky Howard
#6
Uncle Doug, your no doubt everyone's favorite. And. with good reason. I love seeing the love in your and Aunt Mickey's eyes whenever you look at one another. I will never forget the time when I was fifteen and you took me into the bathroom and washed the make up off my face because you said I had too much on. From that day on I took your make up "tips" with me. I always loved coming home from school and seeing you sitting at the table. You always checked up on mother and I. - Love your pee pot
Esther Gideon
#7
I just found out that Doug passed away. I was so sorry for you. My John passed away Dec. 12 2012. It really is hard when they leave us. Call me. Linda and I would love to talk to you. Love Esther
Elizabeth A Zimmerman
#8
Mickey, Today, I learned of your loss.
I will never forget Doug's talent. My husband Paul and I visited you often at the festival at Hunter Mountain, NY. I have "winter Apples" that you sent me when I lived in Holyoke, MA many years ago. Paul passed in 1999 and, now I live in Las Vegas, NV retired for many years. You had a photo of us in your motor home.
Recently I have passed my beautiful jewelry that Doug designed and made for me on to my daughter Carla Dennis (Chicopee, MA.) so that she may enjoy the beauty of Doug's work. She wanted to write to you and, instead, found this notice. I send you Mickey my love and prayers,knowing you have suffered a great loss.
I still have my medicine hat with the feather. I now reside at 10753 Hunter Mountain Ave, las Vegas, NV 89129.