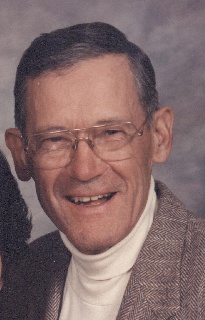 JAMES E. WHITE
CANASTOTA- James E. White, 82, of Howard Street, died Saturday, June 22, 2013 at Oneida Healthcare Center.
Born in Oneida Valley on December 28, 1930, he was the son of John E. and Nellie Sterling White, Sr. A resident of Canastota for the past forty eight years; Jim was a graduate of Oneida High School and Alfred State College and attended the College of Forestry at Syracuse University. James married Josephine Bonn in Syracuse on September 1, 1962.
Prior to his retirement,  Mr. White was the president of White-Bonn Contraction Inc. He was a communicant of St. Agatha’s Church and a member of their choir. Jim was a member of the American Legion, Charles Miller Post 140. He was a carpenter, builder, business owner, inventor, hunter, fisherman, storyteller, employer and father. Dedicated his life to making, fixing and teaching. Utilitarian to the core, pratical to a fault. His 13 year struggle with the aftermath of several strokes ended today. James was a veteran of the US Army, he was a Corporal serving as a civil engineer in Germany during Korean War.
Surviving besides his wife, Josephine, are; one daughter, Susanna M. White of Hamilton; three sons and two daughters-in-law, Patrick J. White and his companion Sheri Smith both of Canastota, Andrew J. and Kelly White of Urbandale, Iowa and James J. and Amy White of Mullica Hill, New Jersey; two sisters and one brother-in-law, Johanna and Donald Jones of Verona and Josephine Jones of Vernon; two grandchildren, Ashleigh and Sean; and several nieces and nephews. He was predeceased by one brother, John E. White, Jr. on April 14, 2010.
Funeral services will be held, Thursday 1 PM, from the St. Mary’s of the Lake Church, where the Funeral Mass will be celebrated by the Reverend Charles Currie, officiating. Friends may call prior to the funeral services 10 AM to 12 PM, at the Campbell-Dean Funeral Home, Inc., 300 South Peterboro Street, Canastota. Contributions may be made, to the Canastota Public Library, 102 W Center Street, Canastota, NY 13032. To leave a message of condolence, please visit www.campbell-dean.com
CAMPBELL-DEAN FUNERAL HOME, INC.
Canastota
Condolences(01)
R.I.P .Mister White
#1
R.I.P Mister White from the Avery family...
Top