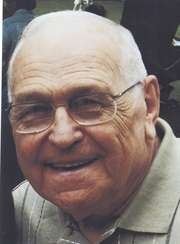 Biography: CHARLES B. LECLAU, JR.
ONEIDA- Charles B. Leclau, Jr., 83, of Upper Lenox Avenue, passed away Thursday morning, March 14, 2013, at his residence following an illness of several months.
Born in Oneida on July 9, 1929, he was the son of Charles B. and Hazel Bond Leclau Sr. A lifelong resident of the area, Charlie was a graduate of Oneida High School, Class of 1948. He married Karen DeVaul in Sherrill on November 26, 1966.
Prior to his retirement in 1987, Charlie was employed as a letter carrier with the United Postal Service. He was previously employed with Vernon Downs as a security guard, retiring in 1982 and assisted at Campbell-Dean Funeral Home from 1986 to 2012. Charlie was also a coach for the Pop Warner B-Team for many years.
Charlie was a veteran of the United States Army serving during the Korean Conflict from 1952 to 1954. He was a member of the Oneida-Sherrill Lions Club, the Oneida Area Civic Chorale and the barbershop quartet "Shine". Charlie was a former member of the Sherrill American Legion, Post # 230 and a member of the First Presbyterian Church.
Surviving besides his wife Karen are: one daughter, Darcie Sansone of Canastota; one son and daughter-in-law, Jeffrey S. and Ruby Leclau of Rome; five grandchildren, Carley Sansone and her fiancé Matthew Moonen, Danielle Sansone and her companion Matthew Ball , Jamie Sansone and her fiancé Jeff Waterman, Elizabeth Santiago and her fiancé Ryan Kuc, and John Santiago; two great-grandchildren, Kendall and Alanna; one sister, Monica Dermody of Oneida; one brother-in-law and two sisters-in-law, Jerry and Ardis DeVaul of Oneida and Linda Emig of rome; one son-in-law, James Sansone of Oneida; and several nieces and nephews who were an important part of his life. He was predeceased by three sisters; Dorothy Williams, Mildred Stress and Shirley Leigh, two brothers, Henry and Clyde Leclau and a brother-in-law, Michael Emig.
Funeral services with military honors will be held 10AM Tuesday from the Campbell-Dean Funeral Home, Inc., 260 Main Street, Oneida, with the Reverend Kurt Johnson, officiating. Interment will be made in Glenwood Cemetery. Friends may call at the funeral home on Monday from 3-7PM. Contributions, in Charlie's memory, may be made to Hospice and Palliative Care, Inc., 4277 Middle Settlement Road, New Hartford, NY 13413 or to The Animal In Need Fund c/o Happy Valley Animal Hospital, 6127 Happy Valley Road, Verona, NY 13478. Envelopes may be obtained at the funeral home. To leave a message of condolence, please visit www.campbell-dean.com.
CAMPBELL-DEAN FUNERAL HOME, INC.
ONEIDA