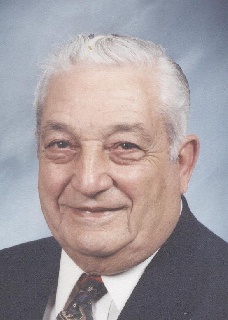 PHILIP T. CATALANO, SR.
ONEIDA – Philip T. Catalano, Sr., 91, Bates Avenue, died Saturday, July 6, 2013, in St. Joseph’s Hospital, Syracuse, where he had been a patient for the past six weeks.
Born in Oneida on June 14, 1922, he was the son of Salvatore and Anna Messina Catalano. A lifelong resident of the area, he was a graduate of Oneida High School, Class of 1941. Philip married Sarah “Sally” De Mauro on October 5, 1946, in St. Agatha’s Church. Mrs. Catalano died August 27, 2004.
Prior to his retirement, Mr. Catalano was an installer and repairman, for thirty-eight years, with New York Telephone. He was a communicant of St. Joseph’s Church and served as an altar boy, handyman volunteer and  Eucharistic minister, a  member of the Knights of Columbus, E. Bart Hanifin Council #473 and served on the bingo committee, the American Legion, Oneida Post #169, the Oneida High School Boosters Club where active in volunteering, the Oneida City Hospital as a volunteer, and the American Association of Retired Persons, (AARP),  assisted a volunteer with income tax preparation and was active in various bowling leagues.
A veteran of World War II, Phil served with the United States Navy from 1942-1946. After attending two naval schools, he served 1942-44 in the European Theatre on the destroyer USS Badger and then in the Pacific Theatre, aboard the USS Zaniah, where he was present for the Invasion of Okinawa.
Surviving are three daughters and two sons-in-law, Betsy Hauswirth and Barbara and Tim Stevenson, all of East Syracuse and Marianne and Jesper Widen of Irvine, California; four sons and three daughters-in-law, Sam and Kathy Catalano of Cornelius, North Carolina, Pete Catalano of Oneida, Philip and Paula Catalano, Jr. of Manlius and Tom and Carrie Catalano of Gibsonia, Pennsylvania; fifteen grandchildren, seven great-grandchildren and several nieces and nephews. He was predeceased by a sister, Mary Spicer and two brothers, Casio and Joseph Catalano. Nothing meant more to him than his family.
The family wishes to thank all of the healthcare providers at St. Joseph’s Hospital Surgical ICU floor and the Oneida Healthcare Center for their wonderful care.
Funeral services will be held 9:15 AM Saturday from the Campbell-Dean Funeral Home, Inc., 260 Main Street, Oneida and 10 AM from St. Joseph’s Church, where the Funeral Mass will be celebrated by the Reverend Richard Kapral, pastor. Interment, with full military honors,
will be made in St. Patrick’s Cemetery. Friends may call at the funeral home, 4-8 PM, Friday. Contributions may be made to St. Joseph’s Church, 121 St. Joseph’s Place, Oneida, NY 13421. Envelopes for this fund may be obtained at the funeral home.
To leave a message of condolence, please visit www.campbell-dean.com
CAMPBELL-DEAN FUNERAL HOME, INC.
ONEIDA
Condolences(0)
Top