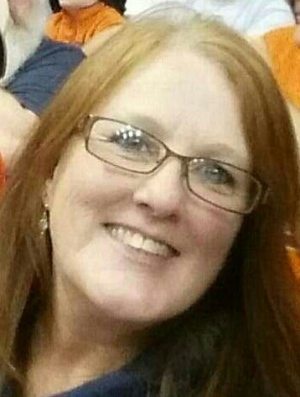 Biography:  TERRI A. DAVIS
ONEIDA-Terri A. Davis, 56, Liberty Street, died Tuesday, December 29, 2015, in the Buffalo General Hospital, where she had been a patient for the past eight days.
Born in Oneida, on December 17, 1959, she was the daughter of H. Edward and Cynthia Murray Perkins. A lifelong resident of Oneida, Terri was a graduate of Oneida High School, Class of 1978. She married Bradley K. Davis, Jr. in Alabama on October 22, 2011.
Prior to her retirement, with thirty-three years of service. Terri was employed with Central New York DDSO as a supervisor at the Oneida facilities. She was a member of the Order of the Owls, Oneida Nest 1606, loved camping and was an avid Chicago Bears fan.
Surviving besides her husband, Bradley, and her mother, Cynthia of Oneida Castle, are her two daughters, Stephanie R. Clark and Sarah E. Clark, both of Oneida; her son and his fiancé, Dominick Clark and Chenell Fox of Geneva; her step-daughters, Janelle Davis of Rome and Brynn Davis of Oneida; her brother, Timothy E. Perkins of Oneida; four grandchildren, Brooklyn Clark, Linkoln Clark, Kalah Grinnell and Keegan Grinnell; one nephew, two aunts, one uncle and several cousins.
Funeral services will be held 10 AM, Saturday, January 9, 2016, in St. Joseph’s Church, where the Funeral Mass will be celebrated by the Reverend Richard Kapral, pastor. Interment will be made in St. Patrick’s Cemetery. Friends may call at the Campbell-Dean Funeral Home, Inc., 260 Main Street, Oneida, 3-7 PM, Friday. Contributions, in her memory, may be made to the American Cancer Society, Box 7, 6725 Lyon Street, East Syracuse, NY 13057
To leave a message of condolence, please visit www.campbell-dean.com.
CAMPBELL-DEAN FUNERAL HOME, INC.
Oneida