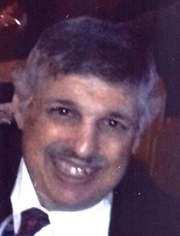 Biography: VINCENT "SPADDY" SPADAFORA, JR.
CANASTOTA- Vincent L. Spadafora, Jr., 65, New Yorker Ave, died Friday, March 15, 2013, in Oneida Healthcare.
Born in Oneida on September 6, 1947, he was the son of Vincent and Rose Barbano Spadafora. A lifelong resident of the area. From 1967 - 1970 Vincent served in the United States Army as a sergeant, while serving two tours of duty in South Vietnam. Vincent received an Associated Degree from Onondaga Community College, went on to earn his Bachelor of Science at SUNY Empire State College, and then a Master's Degree in Education through Hamilton University of Wyoming. He married Elaine Sorbello in Sherrill on May 31, 1991.
Vincent was employed with Onondaga Community College as an Assistant Professor, teaching Radio Broadcasting. Also taught for forty years as an Electronic Media Communications Professor at Onondaga Community College. He had forty-two years of broadcasting experience working for various radio stations. Mr. Spadafora a member of the Society of Broadcast Engineers was also an Inductee of the National Pop Warner Football Hall of Fame, and the President and League Rep for Tri Valley Pop Warner Football Conference.
Survived by his wife, Elaine, are two daughters and son-in-law, Jill and Loran Crosby of Canastota and Megan Green and her companion Scott Muggle; two sons, Vincent Spadafora III of New Hampshire and Anthony Spadafora of Canastota; two sisters and brothers-in-law, Jaki and Bill Boyd of Texas and Fran and Fred Manzella of Ithaca; three brothers and two sisters-in-law, Thomas and Peggy of Canastota, Richard and Jan of Oneida and Robert of Oneida; and two grandchildren, Carter and Mason Crosby.
Funeral services will be held 9:45 AM Tuesday, from at Campbell-Dean Funeral Home, Inc., 300 South Peterboro Street, Canastota and 10:30 AM from St. Agatha's Church, where the Funeral mass will be celebrated. Interment will be made in St. Agatha's Cemetery. Friends may call at the funeral home from 2 to 4 PM and 6 to 9 PM Monday. Contributions, in his memory, may be made to the American Cancer Society, PO Box 7, 6725 Lyons Street, E. Syracuse, NY 13057. Envelopes may be obtained at the funeral home. To light a candle, please visit www.campbell-dean.com