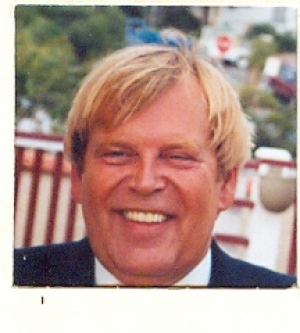 Biography:  CLARK PERLEE BILLINGS
Kirkville – Clark PerLee Billings, 67,  previously of Oneida Castle and Dewitt, died Tuesday, July 12, 2016 in James Square Health and Rehab Center, Syracuse, of complications caused by Chronic Obstructive Pulmonary Disease (COPD).
He was born and raised in Utica, attended Ithaca College, and graduated from Syracuse University in 1974.
Mr. Billings retired from New Channels Cable TV in 1996.  In 1998 he was appointed by the Department of Commerce to manage Census 2000 for the entire Central New York region of the state.
He served as a Major from the 1209th US Army Garrison in Mattydale and was a member of the Reserve Officer’s Association and Sherrill American Legion Post #230.
Clark will be greatly missed by those who knew him as a big, easy going guy who always enjoyed his big Cadillacs.
Surviving are the mother of his children, Nancy Miller Billings Maquire of Kirkville; his daughter, Carly L. Billings of Kirkville; his son, William Billings and his wife, Julie; and two grandchildren, Paul and Jillian, all of Chittenango; a sister, Kay Blancovich of Utica; and dear friend Patricia (Tish) Wisniewski of Woodstock, Georgia.
Funeral services will be held 2 PM Tuesday from the Campbell-Dean
Funeral Home, Inc., 260 Main Street, Oneida, with Pastor Harold “Sandy” Sanderson, officiating.   Interment will be made in Valley View Cemetery.  Visitation will be held from 12noon-2 PM, prior to the service.  Contributions, in his memory, may be made to the American Lung Association, PO Box 113, Sauquoit, NY  13456. To leave a message of condolence, please visit www.campbell-dean.com.
CAMPBELL-DEAN FUNERAL HOME, INC.
Oneida

Condolences(11)
Theresa Stanton
#1
To Carly & Nancy and the rest of the family, speaking as his "personal" respiratory therapist, it was without a doubt such a pleasure getting to know Clark. I enjoyed many wonderful conversations with him that I will forever remember. Sometimes there are a few patients that touch our hearts, he definitely touched mine and will be greatly missed. My deep condolences. Theresa
Le Moyne College
#2
Please accept the most heartfelt sympathies of Le Moyne College. We hope the love and memories that you will forever hold in your heart bring you peace and comfort during this difficult time.
Le Moyne College, Office of Alumni and Parent Programs
Syracuse, NY

Dennis Schulz
#3
Bill & Julie,
I'm so sorry for your loss. Please let us know if there is anything we can do.
Doug & Jayne Chandler
#4
Nancy and Carley, We have fond memories of our days as neighbors with you in Orvilton. We spent some enjoyable times together. Our prayers are with you during this difficult time.
Jim Williamson
#5
Bonnie's and my heart go out to Nancy, Bill and Carley. Clark was a life long, very close friend. He was a gentle giant. Never a mean word was ever uttered from his mouth. I will miss him until the end of my days.
Bob White
#6
My memories of Clark go back to High School days and the years we spent as fellow musicians and friends in a local rock band...he was a great musician, always in good humor, full of life and gregarious in nature. He will be dearly missed by all who knew him.
Jan Sherry
#7
To Carly and Nancy, please accept Annie and my heartfelt sympathy. Clark loved his family, and you took such outstanding care of him. What a nice man! (As he got sicker, I think he saw you as two angels. I would have). Our thoughts are with you both during this terribly difficult time. Please let me know if there is anything I can do that might be helpful.
Randolph Smith
#8
I am so sorry for your loss. I was a classmate of Clark's we graduated from grade school and high school together. May God guide you in your loss.
jeff spoto
#9
I am so sorry for your loss.I took care of Clark'cars for many years.He was always thankful and was more of a friend to me and not just a customer. He will be missed

Trina Wheeler
#10
We are so sorry for your loss. I have fond memories of the lake and boating with your family. We've lost touch all these years, but when I saw Clark's picture, I immediately remembered his smile. My parents Dick and Penny send their thoughts too. God Bless.
Jeff Manning
#11
Bill and Julie,
I'm so sorry for your loss. Thoughts and prayers are with you and your family.
Top