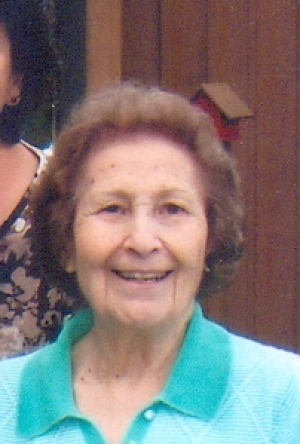 Biography:  JOANNE MITCHELL PAONE
CANASTOTA – Joanne Mitchell Paone, 97, of Lewis Street, died Wednesday evening, July 20, 2016 at home.
Born on June 27, 1919 in Canastota, she was the daughter of Saverio M. (Sam) and Grace LaManna Mitchell.  A lifelong resident of Canastota, Joanne was educated in the Canastota schools. She married Charles C. Paone on August 18, 1973 in St. Agatha’s Church.  Mr. Paone died April 13, 1985.
Mrs. Paone was a homemaker and was a communicant of St. Agatha’s Church and was a member of the Altar Rosary Society.
Surviving are two stepsons and their wives, Anthony and Robin Paone of Canton, Ohio and Carmen and Beverly Paone of Potsdam; three grandchildren, Christopher Paone, Ameera Ataya and Erica Cameron; two great-grandchildren; several nieces and nephews and many friends. She was the last of nine siblings of the Mitchell family.
Funeral services will be held 8:45 AM, Tuesday from the Campbell-Dean Funeral Home, Inc., 300 South Peterboro Street, Canastota and          from 9:30 AM St. Agatha’s Church, where the Funeral Mass will be celebrated by the Reverend Stephen Wirkes, pastor.  Interment will be made in St. Agatha’s Cemetery.  Friends may call at the funeral home, 4-7 PM, Monday.  Contributions may be made to St. Agatha’s Church, 329 North Peterboro Street, Canastota, NY  13032.  To leave a message of condolence, please visit www.campbell-dean.com.
CAMPBELL-DEAN FUNERAL HOME, INC.
Canastota

Condolences(04)
UncleVinny&dottie grasso
#1
Carmen & Anthony & families our prayers are with you sorry we are unable to be with you but you are in our thoughts. the grassos
Joe Cavallaro (& Jim Vossler)
#2
Carmen, Anthony and families. We are so sorry to hear of Joanne's passing. We were out of town last week and just saw the notice in today's newspaper. You are in our thoughts and prayers. Joe and Jim.
Rosemary and Joe Canestraro
#3
Anthony and Carmen and families. So sorry for your loss. We will keep you in our prayers. Cousin Rosemary and Joe Canestraro
Joanne (Cavallaro) Holtz
#4
Anthony, Carmen and families. I wish to express my condolences for your loss. I never met Joanne, but we shared the same spelling of our names. She had a long life and I believe she is now in the presence of our Lord and has returned home. God Bless all of you. Your cousin Joanne Holtz
Top