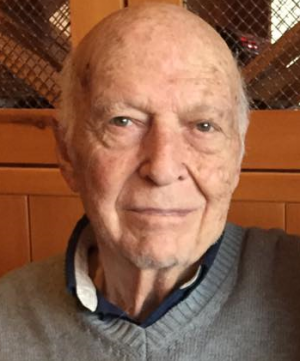 Biography:  DR. RICHARD L. TORNATORE
CANASTOTA- Dr. Richard L. Tornatore, 87, of Canastota, passed away peacefully September 7, 2016.
Born in Canastota, on June 19, 1929, he was the son of Thomas and Alice Wilkinson Tornatore. Richard graduated from Canastota Central Schools and the University of Pennsylvania and its School of Dental Medicine.  He was a captain in the US Air Force stationed in
Toul-Rosiers, France when he met a teacher on the base, Mavis Hovde. They married and he started his Canastota dental practice in 1957, serving his community nearly four decades.
Richard grew up and lived his entire life in Canastota; working the muck lands as a boy, ice-skating and fishing on the Erie Canal, playing on the football team, flying in his father's plane, and enjoying wonderful Italian food. He was a communicant of St. Agatha's
Church and a member the Cazenovia Country Golf Club. He enjoyed summers at Hatch Lake with family, traveling with life-long friends, and watercolor painting. Richard was a passionate amateur radio operator who made friends around the world as 'K2AK.'
He is survived by his wife, Mavis; his son and daughter-in-law, Mark and Eileene Tornatore of Honeoye Falls; his daughter and son-in-law, Beth and Jon Wurtmann of Saratoga Springs; his beloved grandchildren Kirsten, Matthew, Bryan, Jonathan, Tucker and Peter; his sisters Deborah Tornatore of Canastota and Mary Ellen Tornatore and her husband, John Smolenski of Skaneateles; his sister- in-law, Mary Tornatore of Canastota; and his nephew, Steven Tornatore. He was predeceased by his brother Sam Tornatore.
Funeral services will be held 9 AM, Tuesday from the Campbell-Dean Funeral Home, Inc., Canastota and 9: 30 AM from St. Agatha's Church, Canastota, where the Funeral Mass will be celebrated by the Reverend Stephen Wirkes, pastor. Entombment, with full military honors, will be in St. Agatha's Cemetery. Relatives and friends may call at the funeral home, 4-8 PM, Monday.
Memorial contributions may be made to St. Agatha's Bereavement Committee, 329 North Peterboro Street, Canastota, NY 13032. To leave a message of condolence, please visit www.campbell-dean.com.
CAMPBELL-DEAN FUNERAL HOME, INC.
Canastota

Condolences(10)
Mark & Brenda Tornatore of LaGrangeville, NY
#1
Sorry to hear of Richard's passing. He was my dentist while I lived in Canastota and was a good man with a great sense of humor. Our condolences to all of the family.
Marlene Kelly and family
#2
Our sympathies to Dr. Tornatore's passing to his family. He was always a great neighbor on Hatch Lake. So sorry for your loss.

John and MaryAnne Rice
#3
Our condolences to Dr. Tornatore's family. Our family dentist and a cosmetic dentist ahead of his time. He will be remembered by us as a gracious and kind man. We are sorry for your loss.
Liz Moore
#4
So sorry to hear of Dick's passing. My sympathies go out to Mavis, Beth, Mark. As I took a moment to remember a wonderful man, I remembered all the "firsts" that I experienced with him during visits to Hatch lake...church, volleyball, ping pong, and water skiing/boat ride and probably more. All so special to me and so was he. Even though I haven't seen him in many years, I often thought of him and always will.
Bob Houle
#5
Although I did not know Dr Tornatore, I know his son Mark and two of his grand children- Bryan and Kristen through the Boy Scouts here in Honeoye Falls.

You get a good sense of a person when you meet their children and Grandchildren. Son Mark is also a dentist and a valuable member of the Victor and Mendon/ Honeoye Falls community. Dr. Tornatore's adventures inspired his children and grandchildren to do more, see more and be more to their communities. They did.

It was a privilege to work with Bryan and his family with my sons on his eagle Scout project this past summer and to then attend this Eagle Scout awards ceremony. Kristen also helps the Boy Scouts as a director and is an asset to our entire council. Bryans; good works inspire my family and my little boys.

Dr. Tornatore's influence was great and 100 miles West in Rochester we also will enjoy the fruits of his life and hard work for a long time to come!

Condolences to the Tornatore family.


Frank Colquitt
#6
To the Family of Dr. Tornatore: My heartfelt condolences to you at this very difficult time. May your hearts find a measure of comfort in Our Creator's wonderful promises for the near future (Isaiah 33:24; Revelation 21:4,5).Until then, may your cherished memories, strengthen and comfort you through the very difficult days ahead (2 Corinthians 1:4,5). Respectfully,I am sorry for the loss of your dear loved one.
Frank and Betty DiCostanzo
#7
Dr. Tornatore Family...Our sympathies to all. We did not know Dr. Tornatore but do know son Mark who is our dentist. Mark is a fine dentist but more importantly is a wonderful person which reflects well on his father and mother.

We are so sorry for your loss.
Liz Voss
#8
Dearest Mark & Eileen,
Frank & I were saddened to hear of your Dad's passing. As you know, I so vividly remember his office above downtown and the many conversations he and my Dad had while I was in the chair. When he moved into his new office, I would see him drive the riding mower past the house on James St. He was so proud of you and Matt when I spoke with him at the graduation. He was a fine man who touched many lives.
Nancy Burton
#9
My condolences to Mavis, Mark and Beth. Dr Tornatore was not only my family's dentist for many years, but I had the pleasure of babysitting for the family during the mid-1960's. I enjoyed the whole family, and have appreciated Dr Tornatore's dentistry skills for decades. He was a lovely man.
Amanda Mandia
#10
I was so sorry to hear of "Dr. Tornatore's" passing...He was a cherished friend of my grandparents and my childhood dentist...He was one of few people that called me "Mandy" and I remember Hatch Lake fondly as a wonderful place to play and "grow up" when we visited...I still remember swinging in that big hammock.
"Dr. Tornatore" also gave my husband and I some beautiful watercolor paintings of our homes...what a wonderful keepsake of his memory...though I will never forget him, nonetheless.
He was a wonderful man...heartfelt condolences and love to "Mrs. Tornatore", Mark, and Beth.
Top