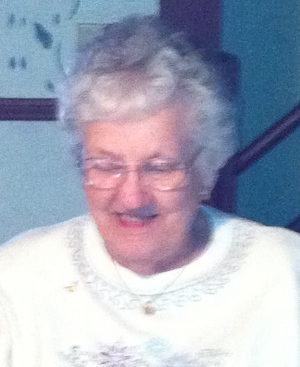 Biography:  DOROTHY C. STURDEVANT
SEVILLE, OHIO- Dorothy C. Sturdevant, 96, of Seville, Ohio, formerly of Canastota, passed away on October 22, 2016 in Parma, Ohio, with her family by her side.
Born in Collamer on July 14, 1920, she was the daughter of Fred and Mary Lindsman Craver. A lifelong resident of the area until November of 2015 when she moved to Ohio with her granddaughter, Dorothy was a graduate of Central Square High School. She married Robert Sturdevant Sr. on December 28, 1941 in Vernon. Mr. Sturdevant passed away on June 11, 1997.
Prior to her retirement, Dorothy was a server at the thruway restaurant where she was also the Union Steward and had previously been employed by The Boat, formerly of Vernon. She was one of the first members of the Lincoln Fire Department Auxilary and was an active member for over twenty-five years. Dorothy enjoyed spending time with her grandchildren and great grandchildren and was a member of the Clockville United Methodist Church.
Surviving are: one son, Robert Sturdevant Jr. of Canastota; five grandchildren and their spouses; Heather Sturdevant-Bojovic and her husband Toma, Robyn and Rick Harvell, Robert and Debra Sturdevant III, Eric and Charity Sturdevant and Amanda and Chris Volansky; eight great-grandchildren with one more on the way, Robbie and Kenny Bach, Richard, Thomas and Jack Harvell, Joshua and baby Volansky, Olivia Haupt and Emma Sturdevant; daughter-in-law, Linda Sturdevant of Clockville and several nieces and nephews. She was predeceased by a son, Walter Sturdevant, a sister, Hazel Buss Denninger and two brothers, Edward and Walter Craver.
Funeral services will be held 1pm Saturday from the Clockville United Methodist Church with the Reverends Abigail Browka and William Wilcox, co-officiating. Interment will be made in Skinner Cemetery. Friends may call at the Campbell-Dean Funeral Home, Inc., 300 South Peterboro Street, Canastota, on Friday from 4-8pm. Contributions may be made to the Clockville United Methodist Church Life Chair Fund, Clockville and Oxbow Roads, Clockville, NY 13043. To leave a message of condolence, please visit www.campbell-dean.com.
CAMPBELL-DEAN FUNERAL HOME, INC.
Canastota

Condolences(01)
Jim and Laurie
#1
Our time here is so short. Some people will touch your heart for a moment, while others forever. You, Dorothy are a forever.
May God hold you tight with a warm welcome as you enter his kingdom. He knows you will brighten heaven just by being there.
May God bring peace to your family on these coming days.
Top