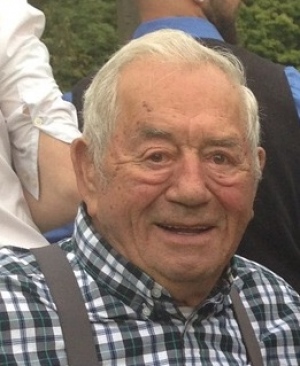 Biography: JOSEPH R. GRENIER SR.
ONEIDA- Joseph R. Grenier, Sr., 88, of Lake Road, passed away a month and a day after his wife Theresa on Tuesday evening, February 13, 2018, in Crouse Hospital where he had been admitted the day before.
Born in Tupper Lake on March 25, 1929, he was the son of Omar “Dodo” and Helen Baudain Grenier. A resident of Oneida since 1976, coming from Buffalo, Joe was educated in the Adirondacks. He married Theresa Montana in Rome in 1950. She passed away on January 12 of this year.
Prior to his retirement, Joe was employed with the New York State Department of Transportation as a mechanic. He was an avid outdoorsman enjoying hunting, fishing and gardening and also woodworking. Joe was a member of the New Life Assembly of God Church in Oneida Castle. He was a veteran of the United States Marine Corps, serving during the Korean Conflict.
Surviving are: two sons and three daughters-in-law, Joseph and Jannell Grenier of West Leyden, Kenneth and Kathy Grenier of Boonville and Deborah Grenier of Buffalo; seven grandchildren; seven great-grandchildren; four step-grandchildren; two sisters-in-law, Agnes Nickerson of Rome and Claudia Montana of AZ; and several nieces and nephews. He was predeceased by a daughter, Pamela A. Kehoe in 2013, a son, Bruce Grenier in 2014, one brother and two sisters.
Funeral services will be held 3PM Saturday, February 17, 2018, from the Campbell-Dean Funeral Home, Inc., 260 Main Street, Oneida with Pastor Dan King officiating. Spring interment will be made with Theresa in Rome Cemetery with military honors. Friends may call at the funeral home from 1-3PM Saturday, prior to the funeral service. Contributions may be made to the New Life Food Pantry, 4704 State Street, Oneida, NY 13421 or to Wanderer’s Rest, P.O.Box 535, Canastota, NY 13032. To leave a message of condolence, please visit www.campbell-dean.com.

CAMPBELL-DEAN FUNERAL HOME, INC.
Oneida
Condolences(01)
Lisa Grenier
#1
Lumberjack; Marine; water skier; fire fighter; school bus driver; dog trainer; race car driver; mechanic extraordinaire; pheasant raiser; log cabin builder; tractor-trailer driver (don't think there was anything he couldn't drive); farmer... I'm sure there are many things I've forgotten... There really wasn't much this man hasn't done! Most of all, the greatest patriarch and friend anyone could have! Will miss you but never forget your wisdom and love.