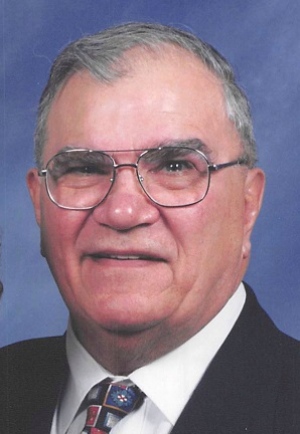 Biography:
JOSEPH A. MAIURA
ONEIDA- Joseph A. Maiura, 91, Glenwood Avenue, died Saturday, July 14, 2018, in the Oneida Healthcare Center, where he had been a medical patient for the past two days.
Born in Oneida, on December 29, 1926, he was the son of Anthony and Elizabeth Cafalone Maiura, Sr. A lifelong resident of Oneida, Joe was a graduate of Oneida High School and served with the United States Army, in the European Theatre, during World War II. He married Blanche Hyland in St. Patrick’s Church on October 4, 1947. Blanche died on October 25, 2006.
Prior to his retirement, Joe was employed with the Oneida Limited, Silversmiths as the Supervisor of the Knife Plant. He was a communicant of St. Patrick’s Church, a member of the Durhamville Veterans Club, the Order of the Owls, Oneida Nest # 1606, the Morrisville Garden Club, the DKUV (German Mutual Benefit Society) and a former member of the American Legion, Sherrill Post # 230.
Surviving are his sister, Loretta Carey of Oneida; two sisters-in-law, Abbie Deraway and Ruth Griffin; three brothers-in-law, Harold Hyland, Bert Hyland and Clarence Cheseboro; and several nieces and nephews. He was predeceased by four sisters, Nancy Mathalia, Rose Tornatore, Jane Burdick and Ann Wagner and four brothers, Sam, Anthony “Step”, Peter and John Maiura.
The family wishes to thank his caretakers, Donna, Rosie and David from Seniors Helping Seniors and his neighbor, Charlie Fishman, for the assistance and concern given to Joe.
Funeral services will be held 10 AM Wednesday, July 25th, from St. Patrick’s Church, where the Mass of Christian Burial will be celebrated by the Reverend Richard Kapral, pastor. Interment with full military honors will be made in St. Patrick’s Cemetery. There are no public hours of visitation. Contributions, in his memory may be made to St. Patrick’s School, 354 Elizabeth Street, Oneida, NY 13421. To leave a message, visit.
CAMPBELL-DEAN FUNERAL HOME, INC.
Oneida