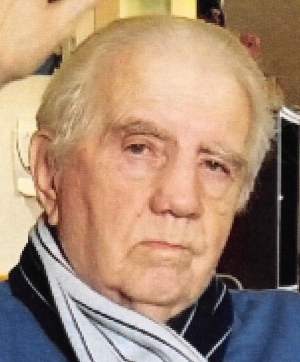 Biography: ROGER P. OUELLETTE
ONEIDA – Roger P. Ouellette, 84, of Valenti Country Estates, passed away early Friday morning, March 1, 2019, in the Extended Care Facility of Oneida Health, after a brief illness.
Born in Lowell, Massachusetts on April 16, 1934, he was the son of Germain and Eva Roy Ouellette. A resident of Oneida since 1968, Roger was educated in Lowell, Massachusetts. He married Gloria Gaudette in Massachusetts on December 16, 1956.
Prior to his retirement, Roger was employed with the United States Postal Service as a mail sorter. Roger was a veteran of the United States Air Force, where he served his country for twenty-two years before he was honorably discharged.
Roger was an accomplished billiard player who had won numerous tournaments. He was an avid Boston Red Sox and New England Patriots fan and attended St. Patrick’s Church.
Surviving besides his wife Gloria are: two daughters and sons-in-law, Donna and Frank Maddix of AZ and Gail and Sam Kenyon of Oneida; one son and daughter-in-law, Brian and Brenda Ouellette of Oneida; three grandchildren and their spouses, Christopher and Alena Thompson, Samuel and Alison Kenyon and Brendan Kooyman; two great-grandchildren, Elizabeth and Matthew; one brother and his companion, Norman Ouellette and Martha Savard of NH and several nieces and nephews. He was predeceased by his siblings, Eva, Lena and Don.
Funeral services, with full military honors, will be held 12 noon on Saturday, March 9, 2019 from the Campbell-Dean Funeral Home, Inc., 260 Main Street, Oneida with the Reverend Deacon James Chappell, officiating. Friends may call at the funeral home from 10AM-12PM Saturday, prior to the funeral service. Contributions may be made to the American Kidney Fund, 11921 Rockville Pike, Suite 300, Rockville, MD 20852 or to the Disabled American Veterans, P.O.Box 14301, Cincinnati, OH 45250-0301.  To leave a message of condolence, visit www.campbell-dean.com.

CAMPBELL-DEAN FUNERAL HOME, INC.
Oneida
Condolences(03)
Michelle and Brian Lipes
#1
Our heartfelt sympathies go out to Roger’s family at this difficult time.
He was such a great man, it was a pleasure knowing him. He will truly be missed.
Rest In Peace Roger, the pool hall won’t be the same without you.