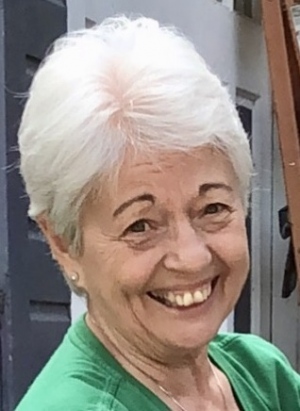 Biography:  MARTHA V. “MARGE’ DI GEORGE
CANASTOTA- Martha V. “Marge” Di George, formerly of Den Wit Terrace, Canastota, died Monday, March 25, 2019, surrounded by her family, in the comfort of her home, in North Bay, following an illness of several months.
Born in Canastota, she was the daughter of Nicholas J. and Rose Buttino Fusillo, Sr.  A lifelong resident of Canastota, recently moving to North Bay in August of 2018, Marge was a graduate of Canastota High School. She married Paul F. Di George in St. Agatha’s Church, on July 13, 1963. Paul died on April 4, 2014.
Prior to her retirement, with over thirty years of service, Marge was employed with the Oneida Limited, Silversmiths. She was a communicant of St. Agatha’s Church. Marge and Paul enjoyed their winter months in Florida and she truly loved being with her daughters, son- in law, grandchildren and great-granddaughter.
Surviving are her two daughters and son-in-law, Pamela Anderson of Canastota and Terri and Shawn Musachio of North Bay; her five grandchildren, Danielle, Nicholas and J P Musachio and Brandon and Parker Anderson; her great-granddaughter, Adilyn Daily; her sister and brother-in-law, Joanne and James Santone of Delray Beach, Florida; her brother, Robert Fusillo of Canastota; two sisters-in-law, Janet Fusillo of Liverpool and Patricia White of Canastota; a brother-in-law, Sam Di George of Canastota; and several nieces and nephews. She was predeceased by a brother, Nicholas J. Fusillo, Jr., on April 10, 2015.
Funeral services will be held 10 AM, Saturday from St. Agatha’s Church, where the Mass of Christian Burial will be celebrated by the Reverend Stephen P. Wirkes, pastor. Entombment will be made in St. Agatha’s Cemetery. At her request, there will be no public hours of visitation. Contributions, in her memory, may be made to Hospice and Palliative Care, Inc., 4277 Middle Settlement Road, New Hartford, NY 13413.
To leave a message of condolence, visit www.campbell-dean.com.

We’re so sorry for your loss.our deepest sympathy’s to your family.
She was a wonderful woman and will surely be missed.
Top