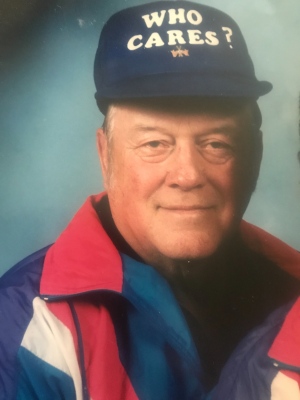 Biography: CLARENCE E. “CHEESY” CHESEBRO, JR.
SHERRILL- Clarence E. “Cheesy” Chesebro, Jr., 92, of Williams Street, died at home on Friday morning, June 7, 2019.
He was born at home on the family farm in Sherrill on August 29, 1926, he was the son of Clarence E. and Augusta Roden Chesebro, Sr. A lifelong resident of the area, Cheesy was educated in Sherrill High School. He married Gloria Hyland in Oneida on September 1, 1946. Mrs. Chesebro died on November 27, 2010.
Prior to his retirement, he was employed by Revere Copper in Rome on the production line. Cheesy previously owned and operated Chesebro’s Grocery Store and as a hobby job, ran a meat processing facility. He was also previously employed by Oneida Limited Silversmith’s for twenty-five years. Mr. Chesebro was a veteran of the United States Navy, serving during World War II from 1944-1946.
Cheesy was a member of the Sylvan Beach American Legion, Post 1153, the Verona VFW, Post 6811, the Durhamville Veterans Club, the Verona Beach Lighthouse Association and the Owl’s Club, Oneida Nest 1606. He loved animals and was always willing to help anyone and everyone in need. Cheesy was a loving father, grandfather, great-grandfather and was a friend to many.
Surviving are three granddaughters, Kelly Collum, Buffy Elder and her fiancé Victor Messier and Monica Fowler; seven great-granddaughters and one great-grandson; eight great-great-grandchildren; one brother, William Chesebro of Old Forge; several nieces and nephews; his dog Dixie and his late wife Gloria’s loving extended family. He was predeceased by two daughters, Teresa A. Fowler on September 27, 2005 and Sandra Holmes on June 19, 2011 and a grandson, Ronald Allen Holmes on December 26, 1976.
Funeral services will be held 12 noon, Saturday, June 15, 2019, from the Campbell-Dean Funeral Home, Inc., 260 Main Street, Oneida. Interment will be made in Verona Cemetery. Friends may call at the funeral home from 10am-12pm, Saturday, prior to the funeral service. A Celebration of Life will be held following the interment from 2-5pm at the Sylvan Beach American Legion. Contributions may be made to Wanderer’s Rest Humane Association or to the Sylvan Beach American Legion. To leave a message of condolence, please visit www.campbell-dean.com.

CAMPBELL-DEAN FUNERAL HOME, INC.
Oneida
Condolences(02)
Jacky Hilliker Hummel
#1
Cheesy and Gloria were my late dad’s best friends in all the world. The mutual respect they had for one another was second to none. Terry and I were acquainted as young girls going to Girl Scout camp. Sandy was friends with my two o,dear brothers...so there has been a relationship for many years. Very saddened to learn of Cheesy’s passing. I will always carry fond memories of the family in my heart. May you Rest In Peace dear friend - enjoy the reunion with your wife and daughters
Buffy
#2
The strongest proudest most humble kind loving man Ive ever known. You were my anchor , my mentor and my whole world. We were so blessed to know you and love you. I am so sad and lost without you , But I am so blessed and grateful to have had you as my grandpa .fly high in the sky and rejoice with your loved ones that have been waiting to embrace you And forever Rest In Peace ❤️
Top